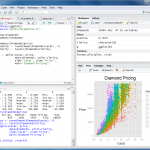 Over on R4Stats, I replied to Bob Muenchen's article, Forecast Update: Will 2014 be the Beginning of the End for SAS and SPSS?

Personally, I think SAS is a wonderful application, with my SAS experience starting in SAS programming back in 1989 (mainframes, along with Fortran), SAS Enterprise Guide (I wrote SAS for Dummies, the first two editions with Chris Hemedinger) and SAS Enterprise Miner.   Additionally, I have used JMP, SAS Data Integration Studio, SAS Forecast Studio and several other SAS tools.

On the other hand, I have used R since 2004 on several projects and S (precursor to R) since the 90's in biopharm. I find R truer to being a modern programming language while SAS is truer to being an analyst programming language. Perhaps I am biased? But, the way I think of attacking problems with data and my typical need to massage the data in a wide range of ways, SAS is simply superior in my opinion. The flow of the language, the ease of readability and the powerful DATA step are still my favorite programming world. However, if I am seeking most any statistical test under the sun, R is clearly superior.

Unfortunately, R doesn't have a clear, de-facto GUI (graphical user interface) that is well-designed and intuitive for business analysts. There are many GUI's, but they are not clean and optimized around the analytic workflow, like SAS Enterprise Guide or JMP. When you frequently analyze data in relatively short periods of time, like in the business world, I simply find R impractical. For example, some of my data mining projects with SAS Enterprise Miner or JMP could be completed in a few days. Key parts of data mining, data science and statistical analysis involve collapsing the data, scanning it in multiple ways, performing complex aggregates with business rules and munging multiple data items.   Part of this speed was due to the ability to stage the data in SAS Enterprise Guide and to write SAS DATA step code as needed.

So, while R is free, for business analysts, it is free like a puppy is free. The cost is in the time to learn it and use it.   If you are   object-oriented programmer (or would like to be) and want to learn Python and R, they can be quite powerful. Most business analysts I know simply don't have the inclination to learn these languages in-depth.

Here's my original comments on Bob's nice review of the growth of various statistical tools:While R-Studio looks like a beautiful IDE, it isn’t a GUI application for business analysts who won’t/can’t invest in learning R as a language.

By GUI, they mean something like SAS Enterprise Guide or Rattle. Most business analysts I know have never learned an object-oriented language, they might pick up bits of Visual Basic and the most popular language they learn is SQL. 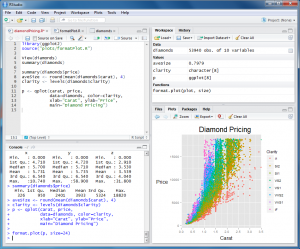 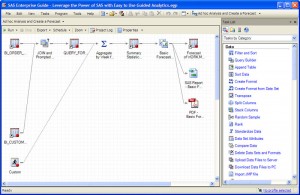 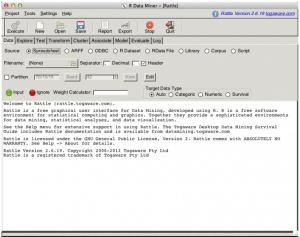