Finding it hard to make time to keep up with the rapidly changing world of data, data warehousing, analytics, data science, business intelligence and visual analytics? We understand! Here’s a top new story worth reading and that we considered noteworthy enough to add commentary and analysis by Freakalytics (in purple).  A summary of the article and excerpts that I comment on are in black.

In this commentary and analysis, we cover the growth of Tableau and QlikView, the opportunities that exist for Microsoft to disrupt the second-generation business intelligence market and how self-service data integration will likely make data scientists & data enthusiasts much more productive- enabling wide swathes of Accidental Analysts to quickly answer tactical business questions.

Five Business Intelligence Predictions For 2014 (from the CEO of Paxata)

Summary
The dust is finally beginning to clear from the big data explosion, which is a good thing. One of the problems with big data is that it’s been led by technology, not business requirements. And business requirements will be the focus in the 2014 business intelligence (BI) ecosphere—to enable enterprises to achieve results with data mining and analytics and to prove those results.

Stephen
I found this article a fascinating glimpse into the strategic thoughts of a CEO of a promising, second-generation, cloud-based data integration company- Paxata.

Finding it hard to make time to keep up with the rapidly changing world of data, data warehousing, analytics, data science, business intelligence and visual analytics? We understand! Each week, I read through hundreds of stories in this space and share the five most worthwhile articles with you. Each article includes a summary and link to the full story.

How Netflix Got Analytics Wrong, Then Right
Two entertaining and informative articles about Netflix illustrate how to be smart about using analytics. In one instance we see where Netflix went wrong, and in another we see Netflix doing the right thing.

Netflix launched a high-profile crowdsourcing project in 2006 to develop a better recommendation engine, offering a $1 million prize to any person or team who could improve Netflix recommendations by a modest 10 percent. 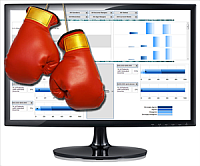 Signs That Your BI Dashboard Needs a Comeback

Everyone loves a good comeback. Stories about celebrities like Robert Downey Jr. and Britney Spears climbing back to the top after falling so far capture our collective imagination. Movies like Rocky and Cinderella Man – about underdogs making a comeback – inspire us to think we ourselves can rebound from any setback.

Is your business intelligence dashboard the underdog at your organization? Dashboards have been around for decades, with some companies not putting the time and effort into updating them regularly to keep pace with the innovations in BI and the growing expectations of users.

"Pitch Perfect" And How Analytics Are Transforming Movie Marketing

When Universal released the cult musical film Pitch Perfect in 2012, they did what any self-respecting studio would do: They commissioned marketing reports and forecasted ticket sales for the Anna Kendrick-starring movie. Among them was an analysis by a company called Fizziology which data-mines social media to see how the film would play out with audiences.