Stephen and I are frequently asked the story of why we wrote the first book endorsed by Tableau Software and how we launched their original, in-person training program back in 2009. In fact, we have been asked about this so many times, I decided it would be worthwhile to share the details.

2008
Stephen first discovered Tableau Software while working at Netflix. He was so impressed with the visual analytic capabilities of the product that after working with it for a couple of years, he approached the executives at Tableau about writing the first book on Tableau, which was still a tiny company at the time. They were excited about the idea so we met with CEO Christian Chabot, CDO and Co-founder Chris Stolte and several other executives to discuss the book content.

July 2009
Stephen completed and published the first edition of Rapid Graphs with Tableau Software just in time for the Tableau Customer Conference in Seattle. Marc Rueter, now a Senior Director at Tableau and Technical Reviewer of the book, wrote

“A great work- this is going to be a much-loved book."

Elissa Fink, now CMO of Tableau, provided a booth for us to to sell books at the conference and wrote

"A must read for anyone interested in Tableau.
Clear explanations, practical advice and beautiful examples!” 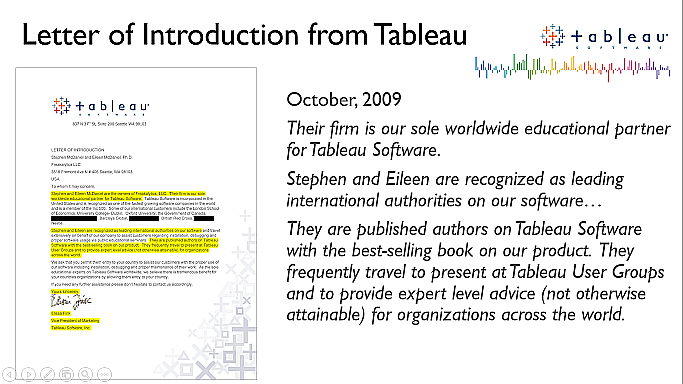 Now the book is in its fourth edition for Tableau 8. We are excited to have helped so many people, including employees at Tableau, learn how to use the software.

August 2009
Stephen strongly believed that Tableau needed a training program, and because executives at Tableau were concerned that there weren’t enough customers to support one, we took on the challenge and the risk of starting the Tableau public training program. It was endorsed and approved by Tableau, who named Freakalytics as the founding Tableau Education Partner.

We began teaching students around the world in public and onsite trainings, and we've not only had a great time but we've also learned a lot from our students. We continue to teach, using our own unique educational materials, and we've taught at multiple Tableau Customer Conferences. Due to the positive response from students regarding our training program, Tableau started their own earlier than planned.

October 2011
We completed the draft version of our software-independent book “The Accidental Analyst: Show Your Data Who’s Boss” in which we developed a framework for business analysts based on the scientific method. We had been planning to write the book before we started Tableau’s training program. Executives of Tableau loved how it explained best practices of visual analytics in a friendly way and would help Tableau users (although it's not about Tableau specifically), so they sponsored a pre-publication run and gave a copy to every attendee of their 2011 Customer Conference. Additionally, at the 2012 Customer Conference, CSO and Co-founder Pat Hanrahan included the book as part of his talk on how he thinks about and teaches analytics. 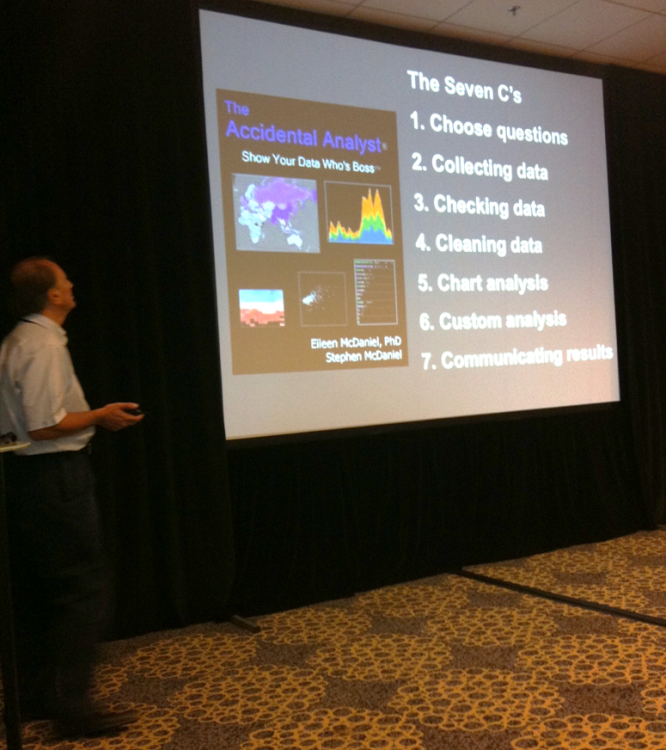 Our books and training program are exclusive to Freakalytics. However, totally separate from our business, Stephen joined Tableau as Director of Analytic Product Management (this was part-time, as we continued our independent training program, with Tableau's endorsement). Stephen had previously run the R&D group at SAS for Enterprise Guide and Microsoft Office Add-Ins (around $100M in revenue), so he had approached Co-founder Chris Stolte about working with him in Development. Chris was enthusiastic about having Stephen on board.

Stephen enjoyed working with the extremely bright and talented developers and designers at Tableau. While there, he championed many unique ideas for the product and totally revamped all the examples and sample data sources that ship to every single customer of Tableau- both Desktop and Server. Some of his ideas have already appeared publicly (he was a core part of the forecasting team) and he was a strong advocate of the “data-in” area (announced earlier this year in London). Many more of his ideas will appear in upcoming versions of the product.

We'd like to thank all our training seminar attendees and readers for their support throughout the years!

All the best,
Eileen McDaniel, PhD